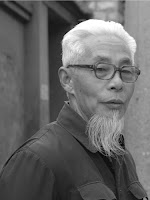 By the way, the photo of me on the right was taken before my first cup of coffee and before I purchased a new set of frames for my corrective lens. The photo was taken in black and white because at the time I had recovered from my jaundiced condition and did not want to make a politically incorrect visual statement by looking like I was imitating an Oriental, which, in case you did not know, is illegal in five U.S. states and most of Canada.
# posted by Frank Cotolo @ Monday, April 09, 2007

Comments:
can I just ask what a oriental witch is, and why is it band ?