Creature from the Amazon Lagoon 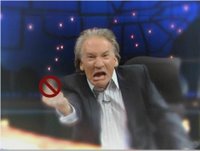 Bill Maher claims he has the "first internet talk show." Without clarifying that the program is a video presentation, he makes a broad statement that simply is not true.

The show is Amazon Fishbowl with Bill Maher, sponsored by UPS and Cingular. It is a weekly internet broadcast "featuring the brightest stars in film, music, literature and television," according to Amazon, which is the headquarters for streaming. New episodes premiere each Thursday this summer. Entertainment Weekly called the show a "weekly cyberbore" that doesn't live up to Bill's bragging.

And, of course, it is not the first internet talk show, no less an innovative presentation. Maher, Amazon, UPS and Cingular need to know that Cotolo Chronicles is the real deal, among the first internet talk shows and certainly the most unique. We urge everyone to email Maher, Amazon, UPS and Cingular and alert them to the truth.

This is not a promotion of the show as much as it is a show of promotion for alternative broadcasting everywhere.