Hair's to you, Phil 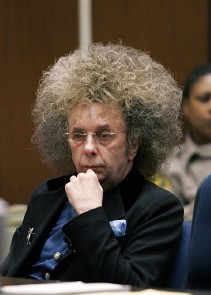 From the C-Chronicles newsroom this day, comes a pop-culture report that threatens to challenge the forces of reality.

HOLLYWOOD, Calif. – Secluded and isolated, no less out of the public eye, famous record producer Phil Spector was recently rushed to the hospital when his hair blew up.

“At first,” said a Spector spokesperson, “we thought it was just a reaction to being exposed to his production-method, Wall of Sound, for so many years. But the sound of the explosion itself did not have his signature Wall of Sound sound, you know?”

Spector, who is facing murder charges and will face a trial in early 2006, claims that the death of a young starlet was an accident. “But it should be noted,” said a Spector counsel, “that the public interpretation of Phil’s behavior in the matter is enough to blow someone’s hair up.”

Spector was treated immediately for the strange malady. His doctor said, “Not many people know the danger of exploding hair. It can even be fatal.”

Dr. Elsmore Putterpall, a specialist in the rare health matter, said, “Mr. Spector was a prime subject for a hair explosion, as our studies indicate, due to the stress he is now under.”

But, Dr. Putterpall said, “We can be thankful it was not an implosion, in which case Mr. Spector would be dead. No one survives a head implosion.”

The doctors said that Spector’s hair came dangerously close to imploding instead of exploding. “Another few seconds,” said a doctor at the scene of the hospital where Spector arrived with his hair still in shock, “and the roots would have swelled and burst inside of his skull, which is, of course, fatal.”

"We may ask for a delay in the trial," a Spector counsel said. "We feel that a jury will not be fair to a man whose hair has run amok. Unless the judge allows Mr. Spector to wear a hat that can contain the willows of hair caused by the explosion, we feel the trial will be a mockery."

"His hair can be cut," said a barber who works near where Spector lives. "I can cut his hair so that it looks as if it never exploded. Then he can go on trial."

But, Mr. Spector’s hair is supposed to be reacting to gravity soon, doctors said.