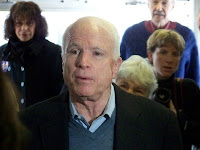 It's a rambling Presidential-election season in America and the 40th anniversary of the "counter-culture" statement, aka 1968's DNC convention. Hope? Change? Through the eyes of an aging John McCain --or is that Paul Simon (pictured left)?
Does anyone remember the prophetic words of Richard Brautigan? How many times are we fooled even if "we won't get fooled again" ? ? ? Tune in for a POV you won't get anywhere else as Barak Obama takes the dim limelight in Denver.